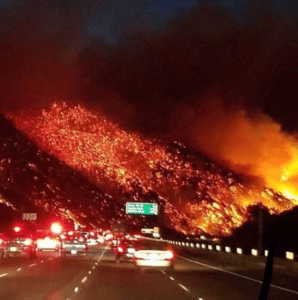 Howard Witkin is something of an expert when it comes to things people don’t appreciate until they truly need them. When he’s not busy raising his children, or making a line of etrog liqueur. Witkin is a life insurance salesman. His other passion is the Los Angeles Community Eruv, a project he’s been heading for the past two decades. Right now, that eruv is in danger, and Witkin is speaking out, hoping he can save it before it’s too late.

“In 14 years, we have been down three weeks,” Witkin said in an interview. Now, facing a $90,000 deficit, the eruv is at risk of being out of commission for a lot longer than that.

For years, Witkin has spent his weeks worrying about everything from storm damage to car crashes in his quest to keep Los Angeles’ eruv up and running. For those who are unfamiliar with the concept of an eruv, it is a ritual enclosure that rings a neighborhood or neighborhoods in order to create a “private domain” for the area’s Orthodox Jews, so that they may carry things in and out of their homes on Shabbat. In many cities, eruvim consist of strings or wires running along a series of poles, but L.A.’s eruv, which stretches some 40 miles, is also composed of barriers created by walls and fences. But just building an eruv isn’t enough; one must check it every week and maintain it. Even a small break in the eruv makes it halachically unfit, and in a city as sprawling as Los Angeles, maintaining the eruv is quite a task.

“There’s always something — you don’t know what it’s going to be,” Witkin said. “We’re out every week for hours.”

Witkin works with a four-man crew of rabbis who check the eruv’s halachic integrity every Wednesday and Thursday, as well as a three-man tree-trimming crew that keeps the eruv free from damage.

Maintaining the eruv has proved especially hard during the last few years of heavy construction on the 405 freeway, but Witkin said the city and state have been remarkably helpful. “We’ve had tremendous support from Metro and Caltrans, all the way down.”

In an email to the community sent Nov. 21, Witkin listed the projects faced in the coming months, which include rerouting around the EXPO light-rail line before the electricity is turned on; reconnecting to the newly reconstructed 405 freeway; reworking the walls in the Sepulveda and Cahuenga passes; replacing the original poles and lines along the current eruv’s eastern border; and moving the southern and northern walls up onto newly installed sound walls.

Sometimes, the highway workers have even helped to save Shabbat. One Friday morning, Witkin got a panicked call telling him that Caltrans had ripped up 50 feet of the eruv fence while doing construction on the 405. Witkin rushed to the scene, but was unsure as to how he’d be able to repair the fence before sundown.

“One of the construction crew guys, a guy from Oklahoma, walked up to me, and said, ‘I want you to know, I talked it out with the guys and we’re going to park our trucks head to toe along this whole section, and we’ll carpool home,’ ” Witkin recalled. These men, who weren’t Jewish, were willing to inconvenience themselves to save Shabbat. Eventually, one of them drove all the way to Orange County to get screen to connect the broken section of fence, and a crisis was averted.

Although Witkin has been impressed by the help he’s received over the years, the community most served by the eruv has often been lacking in their support. “We bear all the costs … there’s no government support,” Witkin said. He has to pay his crews for their long hours of work, and also foot the bill for fixing or upgrading sections of the eruv. “It’s hard to say you won’t give $20, but they should give $2,000.”

Rabbi Elazar Muskin of Young Israel of Century City agrees with Witkin that it’s time for the Orthodox community to step up. “I believe that every rabbi is supposed to be a community rabbi,” Muskin said by phone. “It’s our responsibility to make sure that our infrastructure and our institutions are well supported.”

Muskin has long been a leader in funding the eruv. “Very few synagogues have accepted the obligation … to make this a required part of their membership dues,” he said. “We sent in, this past year, close to $16,000, just from our synagogue. Now, if every synagogue would be doing that … we wouldn’t have this problem.”

When asked what the consequences of the eruv going into disrepair would be, Muskin did not mince words.

“You’re talking about limiting people from carrying anything into the public domain … Mothers won’t be able to take little children to the synagogue. … It’s going to hinder a lifestyle that the Orthodox Jewish community has taken for granted,” Muskin said. “We ran an appeal yesterday. And we’re asking our members — even though they’ve paid dues already, and they’ve supported the eruv — that they have to do more.”

Other rabbis across the city have taken up the call as well. On Nov. 20, Rav Yosef Kanefsky of B’nai David-Judea sent out an email to his congregants with the subject line “Every BDJ Member Needed To Save The L.A. Eruv!!” In the email, Kanefsky urged congregants to give even more, on top of their dues, to save the eruv.

“Our community without our eruv is literally unimaginable,” he wrote. “This is why Howard Witkin, and our own Elliot Katzovitz have volunteered tirelessly for years to keep the eruv up and running. And it’s why we each need to do our part at this moment.”

For his part, Witkin hopes people give, and give generously. “The last thing I want to do is raise not enough money, make the fixes, spend every penny on the fixes, and then I can’t inspect it,” Witkin said. But if donations don’t start coming in, he’ll have to start making hard choices. “We’re going to turn it off on the Shabbos after Chanukah.”

The ERUV is UP

The Eruv has no sponsor this week